A review by Bradley Troll at theatrebelowsealevel

I was a Sophomore in college the first time I watched the movie version. My best friend Julie brought over this VHS with a big pair of lips on the cover, and she promised that my life would never again be the same. I settled in and watched–determined to find the meaning, understand the symbolism and waited for that moment when every odd thing I was watching would suddenly be explained, make sense. I didn’t heed Frank-N-Furter’s advice; I didn’t simply “give myself over to absolute pleasure.” When it ended, I was perplexed. I watched it again the next week, didn’t think too hard, and something finally soaked in. Julie was right; my life was never the same.

Forgive the indulgence of that story, but I promise it relates ot my most recent theatrical excursion–over to see JPAS’s production of Richard O’Brien’s The Rocky Horror Show. Now I’ve been avoiding the stage play for many years because the movie (you know, with the additional word “Picture” in the title) is so unique and specific and special to me. And even though I knew the play was the predecessor and deserved artistic respect as such, I always believed that any staged production that I would see would attempt to recreate the movie experience and, ultimately, be a big disappointment. But on opening night at JPAS, I gave myself over to absolute pleasure once more and left with something unexpected: an entirely new love of the story.

At this point in the review, I usually try to give a brief synopsis of the plot, but for this story, I find that to be a somewhat unusual talk. What can I say? I could tell you, if you’re unfamiliar, that it is the tale of a young couple, a transvestite alien, and the creation of a human monster sex toy. Or I could say that it’s a mix of B-movie parody, rock musical, science fiction, and tragedy. Then again I could say it’s a fable, illustrating the consequences of unabashed hedonism. Or is it the ultimate story of self-acceptance? Perhaps it would suffice to say that it’s glam comedic theatrical spectacle overload. Let’s just leave it at this: if you don’t know the story by now, shame on you!

There are a few choices to make when staging something that has been made iconic by film: recreate the movie, do something entirely new and different, or find a happy medium between the two. Director Jerry Lee Leighton makes the latter choice in his production–a wise move. He captures the spirit of the cult film by incorporating just enough of the familiar to keep us connected (even encouraging audience participation) and just enough of the new to keep us surprised. Several audience members who had come prepared with costumes, props, and a rowdy spirit played along with what they knew and were delighted by the unfamiliar.

Leighton, aside from directing, leads us through the tale in the role of the Narrator, and serves as a wonderful guide. His irreverent sarcasm sneaks in through his academic rhetoric, making him a delightfully cantankerous storyteller who isn’t afraid to shoot the bird to the audience when they accuse him of having no neck; you don’t get that in the film. As the young lovers Brad and Janet, Matias Grau III and Lucy Adair Faust become progressively corrupted by the scandalous Dr. Frank-N-Furter. Grau goes full-force in his portrayal of Brad, cleverly pushing the nerd to the absurd. Faust, though she has a beautiful singing voice, is unfortunately a bit more subtle, and I’m not sure her transition from goody-goody to… well, you know what they call Janet… ever really happens.

Iconic characters Magenta (Marlene Thian), Riff Faff (Chris Wecklein), and Coumbia (Lara Grice) are played a bit differently from the film version, and we feel as though we’re meeting them for the first time. Wecklein, especially, creates a more sinister servant than one might expect and follows through with wonderful comedic timing and a great singing voice. Grice’s Columbia is wackier than the girl you may remember, and the zaniness fits her well. However, it is Armando L. Leduc who comes through as a real scene-stealer in his dual roles of Eddie and Dr. Scott. Especially in the latter role, Leduc puts a bad-boy intellectual spin on the stodgy character that makes for unexpected laughs; you will leave talking about it.


In the film, the doctor’s muscular creation, Rocky, had all of his dialogue removed from the script. For this reason, it was nice to see Rocky come to spoken life through the near-nude Brandon Sutton who gave Rocky a rarely-heard voice. And it would be a crime not to praise the amazing ensemble of Transylvanians that make this world truly come to life. Often draped around the set as voyeuristic eyes, each member creates a character for him/herself that is distinct and interesting. Beyond that, they nail the harmonies and rich tones of the deceptively simple musical score that is executed wonderfully by the orchestra/band under the direction of Alan Payne.

But of course the big question remains: what about Frank-N-Furter? In the make-it-or-break-it role of the show, Richard Hutton does not disappoint. His performance is reminiscent of Tim Curry , but he doesn’t set out to duplicate or imitate–if anything it is an homage. Completely comfortable in his skin-baring fabulousness, Hutton is funny, shocking, and ultimately heartbreaking as he sings of going home.

Minor technical issues aside, such as some microphone buzzing and auditory issues due to the onstage band, JPAS’s The Rocky Horror Show makes me a believer in the possibilities in tackling the iconic. With JPAS’s signature hospitality and encouragement of good-natured chaos, a time-warping trip to Westwego makes for an evening of near-absolute pleasure and the rediscovery of a classic.

The Rocky Horror Show runs through November 7 with Friday and Saturday showings at 7:30 and Saturday late-night showings at 10:30. For more information, call (504) 885-2000 or visit www.jpas.org 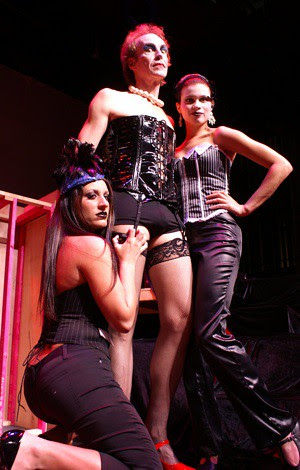 Posted by NorthWest Carrollton at 7:14 PM

Labels: Residents in the News