This article in the Times Picayune says the Traffic Cameras at Earhart and Carrollton are OFF.
And they were during the Earhart Construction that took place during much of 2011.....
BUT the construction is complete AND have no doubt that they will be turned back on.
YOU HAVE BEEN WARNED.....

And please keep an eye out for the Photo Enforced signs...
The city has to tell you they are going to take a photo. So be smart and slow down.

See the graphic from the Times Picayune article below.
I know of at least one camera (Prytania between Jackson & Washington) that is NOT shown on the graphic.  IF there is one then there are others and cameras are added all the time.

Posted by NorthWest Carrollton at 10:09 AM No comments:

So can we get bike lanes and crosswalks painted on Earhart????

NorthWest Carrollton would like to see Earhart become THE template for how Complete Streets could tranform a street and the surrounding neighborhoods and by extension the city..... all for the better.

Many ordinances passed by the New Orleans City Council attract little notice beyond other offices in City Hall. But it didn't take long for an ordinance approved this month on the subject of "complete streets" to begin attracting compliments. Tributes to the council's wisdom rolled in from sources such as the Louisiana Public Health Institute, Tulane University's Prevention Research Center and the University of New Orleans Transportation Institute.

The basic premise of the growing "complete streets" movement is that city streets should not be designed only with cars and other motorized vehicles in mind. Instead, advocates say, designers and engineers ought to consider everyone else who uses the streets, including bicyclists, pedestrians, people in wheelchairs and transit riders.

The goal, according to the National Complete Streets Coalition, is "road networks that are safer, more livable and welcoming to everyone."
The ordinance adopted 7-0 by the council on Dec. 15 at the urging of Kristin Gisleson Palmer, chairwoman of the council's Transportation Committee, says the city's complete-streets program will require that "all transportation improvements are planned, designed and constructed to encourage walking, bicycling and transit use" as well as moving people and freight in cars and trucks.
In practice, the law says, that means streets should be designed and constructed to include features such as "sidewalks, bike lanes, bike racks, crosswalks, traffic calming measures, street and sidewalk lighting, targeted pedestrian and bicycle safety improvements," plus measures to facilitate access for transit riders and people with disabilities. It also calls for an emphasis on "street trees and landscaping, drainage and storm water management, and street furniture and other amenities."
The Department of Public Works and the City Planning Commission are directed to "develop goals and metrics" for the program, which is to be "fully implemented" by December 2012.
Exceptions are authorized for roads on which walking and cycling are prohibited, those where there is no demand for such activities and those where accommodating all users would raise a project's cost by more than 20 percent. The law also does not require broad redesign for minor street repairs such as filling potholes. But whenever a street is overlaid or rebuilt, the new rules apply.
The ordinance was endorsed by Deputy Mayor Cedric Grant, who oversees all infrastructure and capital projects for the Landrieu administration, and recently hired Public Works Director Mark Jernigan.
Jernigan said the new policy represents a "fundamental leap" in the way the city will approach the planning, design, construction and maintenance of streets. It puts New Orleans "on the cutting edge of industry practices," he said. Noting that 24 miles of bike paths have been constructed in recent years, he said, "A lot more are on the way."
Palmer said Louisiana has one of the best statewide complete-streets policies in the country but that New Orleans is the first town or city in the state to adopt its own policy.
Public health advocates favor complete-streets policies because they promote activities such as walking and bicycling.
"Research shows that people take opportunities to be active when intersections, bike lanes and sidewalks are not only available but also well maintained and safe," said Kathryn Parker-Karst, assistant director of the Prevention Research Center at Tulane.
"By creating safer environments for our citizens, we're also creating a healthier lifestyle for many," said Joseph Kimbrell, CEO of the Louisiana Public Health Institute. "The passage of this ordinance is another sign our community is become more forward-thinking for us and future generations."
Palmer said the new approach also can help lower-income people save money by taking public transit or cycling to work. New Orleans already ranks sixth in the country in the percentage of people who ride bikes to work, she said.
The City Council was not the only legislative body embracing complete-streets principles this month. The U.S. Senate Committee on Commerce, Science and Transportation passed a federal transportation authorization bill that includes a measure for the "safe accommodation" of all users in federally financed street projects.

Not quite Goi Du Du 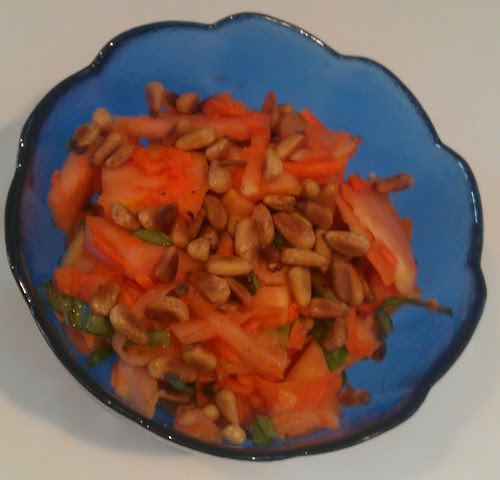 Salad above is a modification of another reciepe.

The trick is to have just little more papaya then carrot.
1 medium (from our papaya tree in the backyard)
5 medium carrots (from the store)

In a large bowl
Soak the larger chopped bits of payaya in the lemon juice.
Add the rest of the papaya
and then sprinkle with kosher salt
Mix papaya and salt
Add carrot & mix

Into another small bowl
Squeeze out the exta lemon juice (the papaya will soak most up)
Add 1/4 teaspoon Habanero Sauce = Habaneros (from the backyard) mixed a blender add salt an a tiny bit of vinegar
Mix well adding a little extra lemon juice to ensure mixing.
Pour over payapa & carrot in the larger bowl and Mix well and Quickly!

Julienne at least a dozen medium Fresh Basil leaves (from the backyard) and add to the papaya & carrot mixture.

Lightly Toast about 1/4 - 1/2 cup of roasted pine nuts (I like more!) and add to the salad and serve.
Posted by NorthWest Carrollton at 4:15 PM No comments:

Please note that we will remember that this was promised:
"Once construction is complete, the corps will put in new landscaping, said spokeswoman Sarah McLaughlin. There likely will be two or three times as many trees planted, with wider, mature trees being replaced inch-for-inch with younger trees, she said."
Can someone please show us the line in the SELA implementation plan and the associated budget so that we will KNOW that this promise (like the one made for Dublin Street) doesn't end up BROKEN?

Also please note that, while the TREES can be replaced, NOTHING has been said or done (or if it has it has not been communicated to the neighborhood organizations that raised the question) regarding the Monticello Canal and the constriction at Airline which will cause all the water that is expected to flow faster down Claiborne from other areas in Uptown to potentially back up into the areas around the Monticello Canal.  Taking Water from wealthier areas and funneling it into less wealthy areas.


See full article from Times Picayune below:Claiborne trees lost to Drainage Project
New Orleans Times Picayune
By Mark Schleifstein
An Army Corps of Engineers contractor has removed 73 trees and dozens of shrubs from the Claiborne Avenue neutral ground between the Jefferson Parish line and Cambronne Street as part of a massive project to improve drainage in the area.

The work, which was completed this week, was the first step in a $27.1 million contract to build about 2,500 feet of covered canal adjacent to the existing canal underneath the neutral ground.
The 38-month project is aimed at improving drainage in the Carrollton area to handle 9 inches of rain in 24 hours, or a 10-year rainfall event.

Once construction is complete, the corps will put in new landscaping, said spokeswoman Sarah McLaughlin. There likely will be two or three times as many trees planted, with wider, mature trees being replaced inch-for-inch with younger trees, she said.

The clearing work was coordinated and approved by the New Orleans Sewerage & Water Board, which is the local sponsor of the Southeast Louisiana Urban Flood Damage Reduction Project, and by the city’s Department of Parks and Parkways, said corps spokesman René Poché.

Poché said corps officials discussed with the city agencies possibly relocating some of the trees, but it was decided to use all the money set aside for landscaping on restoring the neutral ground after the new canal work is completed at the end of 2014.

He said a similar strategy was used in restoring parts of the neutral ground along Napoleon Avenue after completion of a new canal there several years ago.
Posted by NorthWest Carrollton at 6:30 PM No comments:

But not that far either.... So pay attention!!!

Knowing your neighbors is the BEST way to protect yourself.So this holiday season.... say HELLO and Happy Holidays.  It's friendly, nice and it helps keep you safe too.


http://www.fox8live.com/news/local/story/Wave-of-crime-hits-Uptown/soV3XZhc_EmknokyEr5reQ.cspx
Posted by NorthWest Carrollton at 3:06 PM No comments: