Changes are a foot in the New Orleans Fire Department....

But Engine 25 & Ladder 7 will be at Carrollton and Claiborne.....
right here at home in NorthWest Carrollton.

We appreciate our firefighters and it's also wonderful as it is one of the things that helps lower home owner's insurance.

Check out the map and watch the meeting video at Uptown Messenger
http://uptownmessenger.com/2013/05/new-orleans-fire-department-public-meeting-on-redeployment-live-coverage/#more-30572
Posted by NorthWest Carrollton at 10:22 PM No comments:

Beverly Eddins Loar to David Bryan Kelsey and Michelle Talbot Kelsey for $50,000.
Posted by NorthWest Carrollton at 9:53 AM No comments:

Posted by Michael Toso on the Central Carrollton Facebook page:


"As most of you know it is almost impossible to find a decent house in Central Carrollton (river side of Carrollton) for under $200,000. Buyers who are being priced out of Central Carrollton are beginning to look in the area known as “Northwest Carrollton”. NorthWest Carrollton has a strong neighborhood association which has helped the area improve over the past few years. There are many other homes that have been and are currently being renovated in this area.

I owned the home next door located at 2518 Cambronne Street. I put it on the market a few months ago and within a few days I had an offer. I just listed another house located at 2522 Cambronne Street. It is about the same size as the other home and I’m asking $139,000. The floor plan was reconfigured and it was extensively renovated in 2007. It has 3 independent bedrooms and 2 full baths, which include a master suite. The interior was recently painted and the carpeting in the bedrooms is new. 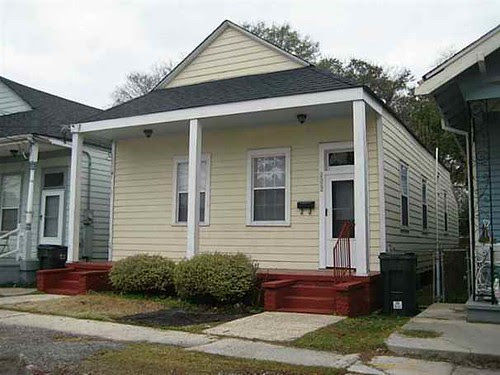 And if you buy this house... contact us at nwcarrollton@mindspring.com
We'll be planting trees this fall and can get you trees for the front of your house for free!
Posted by NorthWest Carrollton at 9:44 PM No comments:

Photo and Article from Times Picayune & Nola.com Click here for link to story.


Music lovers in St. Tammany have an opportunity to listen and learn about the relationship of the north shore of Lake Pontchartrain to the development of jazz as a unique form of American music.

Noted jazz clarinetist and historian Michael White will give a lecture performance on the History of Jazz in Mandeville on June 1, 11 a.m. at the Dew Drop Jazz and Social Hall, 430 Lamarque St. in Mandeville. The event is sponsored by the city of Mandeville and the New Orleans Jazz and Heritage Festival Foundation, and is free to the public.

White is a well-known jazz musician from New Orleans with more than 11 CDs, most recently “Adventures in New Orleans Jazz, Part 2” on Basin Street Records. He not only writes about the history of jazz, but also is related to some of the historic jazz musicians who figure in that history - namely bassist Papa John Joseph who played with Buddy Bolton, a frequent artist in the early days of the Dew Drop; and clarinetists Willie Joseph and Earl Fouche.

White has written essays on New Orleans’ musical traditions and his works have been published in the Journal of American History, Cultural Vistas, The Jazz Archivist, “Encyclopedia of the Harlem Renaissance,” “Seeking Higher Ground” and “Triumph of the Soul.” He’s served as a consultant for the New Orleans Jazz and Heritage Festival since 1995.

He was named Humanist of the Year in 2010 by the Louisiana Endowment for the Humanities and in 2008 received the National Endowment for the Arts National Heritage Fellowship. He’s a resident artist at the Lincoln Center for the Performing Arts in New York and is a professor of Spanish and African American Music at Xavier University in New Orleans.

The lecture performance will discuss the jazz connection between New Orleans and Mandeville, the role of Social and Benevolent clubs, and the community roots of this musical genre.
Posted by NorthWest Carrollton at 8:33 AM No comments:

Labels: Events, Residents in the News

New Orleans Crime Stats - something is going on.

See the story in Nola.com 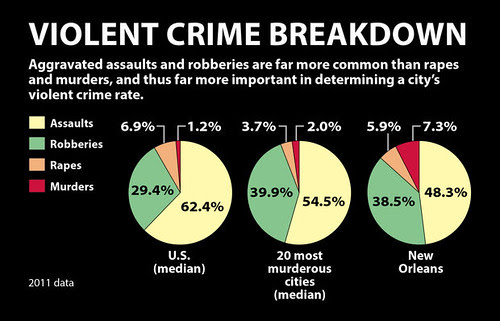 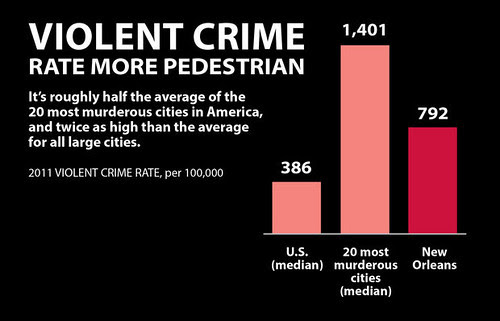 And then there is the Murder Rate 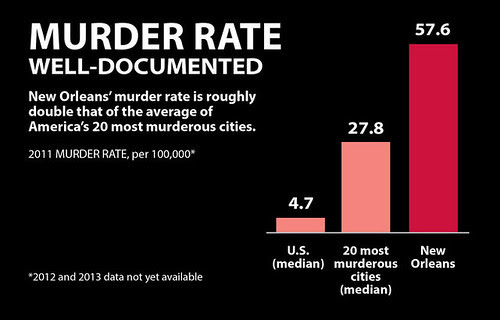 "It's impossible to make judgments, he says, without studying them in great detail. Maybe, for instance, New Orleanians are peaceful generally, but when they decide to quarrel, they're in it for keeps - hence the eye-popping murder rate, but the low assault rate."

"Is it that they're really more lethal (in New Orleans), or that they don't report the aggravated assaults in the same way or to the same extent, which would mean a higher lethality rate?" Lin-Huff Corzine said.

And if this is supposed to make anyone feel better, it doesn't:
"a high proportion of murders that are better classified as assassinations."

For years NWCarrollton and other neighborhoods have asked NOPD if there is a gang problem and been told "There is no gang problem."
The article indicates: "...gangs in New Orleans are unique from those in other cities. Police say you won't find national affiliations here, like the Bloods or Crips. Instead, you'll find smaller, loosely organized neighborhood gangs with a fluid membership ."

Seems Now we're being told there is.... a gang problem.
Which is it?

As the article indicates "It's clear that something is going on."
Yes and we've been saying that for years too.

Posted by NorthWest Carrollton at 8:49 AM No comments:

Posted by NorthWest Carrollton at 11:08 AM No comments:

http://uptownmessenger.com/2013/05/mr-chill-returns-to-home-broadmoor-with-new-hot-dog-and-pastry-shop/#more-30516
Posted by NorthWest Carrollton at 11:02 PM No comments:

Labels: Residents in the News

How to build community

Garden together.
Posted by NorthWest Carrollton at 8:22 PM No comments:

Prayer Flags for the Dalai Lama

On Saturday May 4th Prayer Flags were placed around the necks of the Pritchard Place Lions. By Thursday they were gone.
Stolen?  Removed for philosophical differences? Who knows.

There are still some flags flying in NorthWest Carrollton. 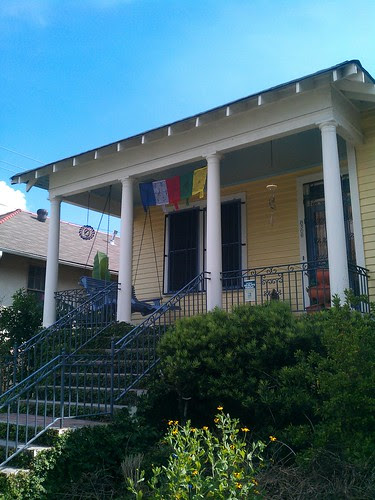 Posted by NorthWest Carrollton at 9:08 AM No comments:

Thank you Kim & Kristyn for all you did for NorthWest Carrollton.
Welcome Curtis & Karen.

Posted by NorthWest Carrollton at 8:51 AM No comments:

Labels: House for Sale, Residents in the News

Thank you John Pope for the article below published in the Times Picayune.
Pat Evans had more than one conversation with the folks who started up NorthWest Carrollton Civic Association.


"Pat Evans, an energetic political consultant and longtime advocate of women's rights who not only managed Mary Landrieu's first successful statewide campaign but also was the first director of the Louisiana Governor's Office of Women's Services, died Thursday at her Treme home. She was 81.

In addition to working in political and social campaigns in Louisiana, Ms. Evans operated on an international scale. She produced documentaries and was an adviser to Margarita Penon in her campaign for the presidency of Costa Rica. In the early 1990s, after the collapse of the Iron Curtain, she worked in countries that had been part of the Communist bloc as they struggled to establish democratic governments.

"She was an advocate for social justice," said Richard Burford, her son-in-law. "She always fought for the underdog."

In a statement Friday afternoon, Landrieu called Evans "a passionate and effective advocate."

"Since the early 1970s, she advocated for social justice, championed equal opportunity in employment and fought for women across our state," Landrieu said. "She had a tremendously positive impact and will be greatly missed."

A lifelong New Orleanian who was born Patricia Terrell, Ms. Evans was known to everyone as Pat. She graduated from Southeastern Louisiana University with a degree in education and started her broadcasting career as "Miss Pat" on "Romper Room" in Baton Rouge.


In 1985, Gov. Edwin Edwards appointed Ms. Evans director of the Governor's Office of Women's Services (now the Governor's Office on Women's Policy). Under her leadership, it grew from a gubernatorial advisory board to an agency with an $8 million budget that designed and implemented programs, in cooperation with the private sector, on topics such as welfare reform, family violence, teenage-pregnancy prevention and counseling for displaced homemakers.

Ms. Evans also worked for legislation on family violence, rape, community property and equal credit, and she helped organize support in Louisiana for the federal Family and Medical Leave Act.

She designed programs for the lieutenant governor's office, the state Office of Elderly Affairs and the state Department of Labor.

Ms. Evans helped organize the Center for Women and Government at Nicholls State University and was a founding member of the center's Women's Hall of Fame.

She was a former president of Odyssey House's Board of Directors.

Burial will be in St. Louis Cemetery No. 2."
Posted by NorthWest Carrollton at 7:26 PM No comments:

A man was shot in the stomach and arm in the Carrollton neighborhood on Saturday night, police said. The victim was shot in the 2900 block of Cambronne Street around 9 p.m., said officer Frank Robertson III, spokesman for the New Orleans Police Department.
The victim was taken to a local hospital. His injuries did not appear to be life-threatening, Robertson said.

Uptown Messenger had more details:
"The male victim was found suffering from several gunshot wounds, the report states, but no further details regarding his condition or the circumstances of the shooting were listed."
Neighborhood rumblings said a girl had been shot but reports indicate is was a male.

NOPD indicated at the May NONPACC meeting that the shooter has been arrested.
Posted by NorthWest Carrollton at 10:07 PM No comments: 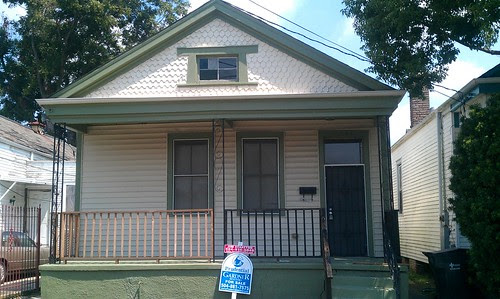 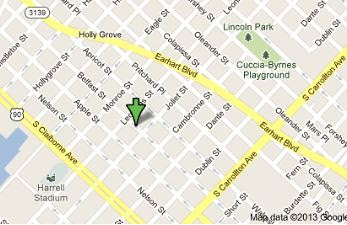 Posted by NorthWest Carrollton at 10:57 PM No comments:

Ron Finley.... has the answers

"Gardening is the most therapeutic & defiant act you can do... especially in the inner city."
Posted by NorthWest Carrollton at 8:17 PM No comments: 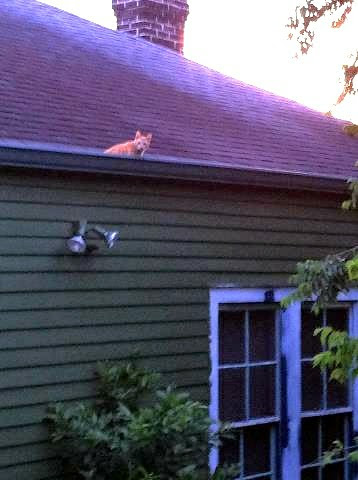