Neighborhoods are about houses & people more than they are about empty lots.

Empty lots are their own kind of Blight. 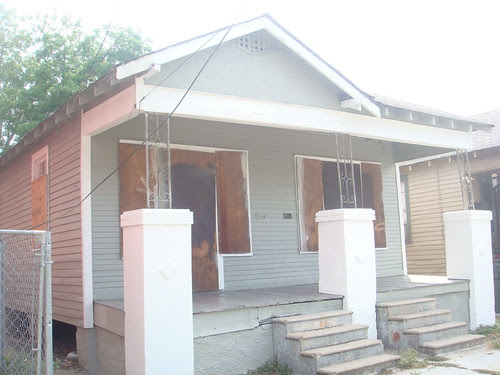 We are glad this property is still in tack.  Demolition denied by NCDC on June 20th.

But how interesting the demolition request of 2 properties (in even better shape) was denied
and then approved with City Council gushing over the owner and yet the remaining lot still sits empty.

Posted by NorthWest Carrollton at 12:38 PM No comments:

Take a look at the Redistricting Plans and Meetings

It looks like NorthWest Carrollton will stay in District A no matter what.

BUT if you really *like* attending public meetings then use the link above to see where they will all be held. You never know when things can change.
Posted by NorthWest Carrollton at 7:16 AM No comments:

Hey Blake,
I was wondering if you had any information on the two large lions on pedestals on Pritchard Place at Carrollton Avenue. Can you tell me when they were placed there and why? Who was Pritchard anyway?
Jenel 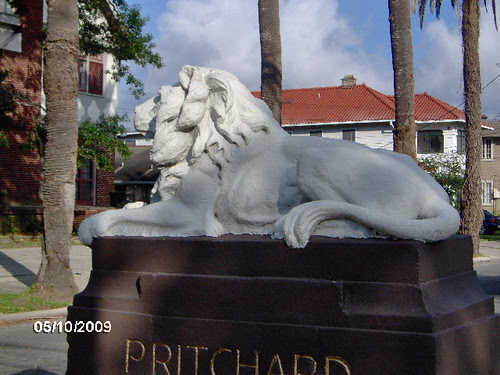 Blake responded in the May 31,2011 Gambit... exerpted below.
"Dear Jenel,
The Pritchard Place subdivision was developed in 1913 and was so named because it was an extension of Pritchard Street, which already existed. Pritchard Street was named for R.O. Pritchard, a businessman who developed the luxurious Verandah Hotel in 1838 on the corner of St. Charles Avenue and Common Street. The hotel cost $300,000 to build; it was destroyed by fire in 1855.

A large ad in the newspaper in 1913 advertised the Pritchard Place neighborhood and showed a picture of the lions that would be placed at the front entrance to guard it. The Albert Weiblen Marble and Granite Company was contracted to carve the lions from Bedford stone.

Residential development had taken off in the Carrollton area, and the developers of Pritchard Place, the Hopkins-Rhodes Company, described it as an "ideal location for your home within easy access to the best car line in the city and only fifteen minutes from Canal Street."

About 15 years later the lions of Pritchard Place were famous, at least locally. Folks who had cars loved a Sunday drive, and the newspaper ran an article suggesting places to go on drives around the city. The lions were on the list. They were in the paper again in 1930, but this time they were portrayed as "extreme traffic menaces." The article pointed out that when the lions were placed on their pedestals, there were so few automobiles that no thought was given to a potential traffic problem. However, drivers emerging from Pritchard Place in 1930 were at risk when they tried to turn onto Carrollton Avenue because the giant lions blocked the view of oncoming traffic. Accidents had occurred, with one near fatality.

In 1999, a car crashed into one of the lions and knocked it onto the sidewalk. After much "roaring" from the folks in the neighborhood, then-state Rep. Alex Heaton and Sheriff Charles Foti restored the lion to its pedestal."
Posted by NorthWest Carrollton at 7:53 AM No comments:

For too many years biking in New Orleans has been focused on RECREATIONAL Biking.
It's time to make it MORE about getting from Point A to Point B.

"For us to say we're successful is to really build the commuting population," says Robert Mendoza, the city's director of Public Works. "If we don't get to that, I don't know we'll be able to say we were successful in doing this."

The challenge now? "The name of the game is increasing connectivity," MBC director Wine says. Finding ways to connect bike lanes to other bike lanes means giving cyclists a place to go once they've arrived at their destination. There are bike paths in Mid-City near Bayou St. John, but how does the city connect those to Carrollton Avenue in Uptown? And from there to St. Charles Avenue? Streetcars and buses have similar budgetary and geographic gaps, but bikes have a bigger obstacle: bad roads.
"I get calls: 'Why does it stop there, why not continue on?'" Ruley says. "The reality is we don't want to direct people to potholes."

Well now that Carrollton is repaved it seems a PERFECT TIME to extend the bike lane from where it ends at Carrollton & Claiborne on toward City Park & the Lake.
Posted by NorthWest Carrollton at 5:22 PM No comments: