What: The musical cult classic finds a naive couple stumbling into the lair of the "sweet tranvestite from Transexual, Transylvania." Costumes encouraged for the 10:30 p.m., especially on Halloween.

Under the direction of Jerry Lee Leighton, the musical's ghoulish characters continuously gyrate and swirl around the perverse master of the house (Richard Hutton), a rakishly regal transvestite from the planet Transsexual who eventually seduces his two unwary houseguests. Every conceivable sci-fi and horror-story device, from hacksaws to lasers, from outer-space aliens to a laboratory-concocted muscle man, are compiled into this madcap Hitchcock-gone-haywire plot, set to boisterous rock ' n' roll. 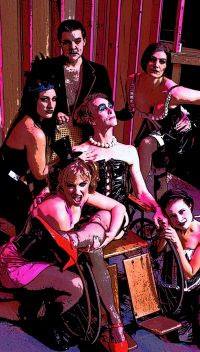 A naive young couple's car breaks down on a desolate road. Who do they turn to for help? Why, to the same mad transsexual scientist who has been "helping" stranded innocents for three decades, of course.

Dr. Frank-N-Furter, along with his cast of campy miscreants of "The Rocky Horror Show" have taken to the stage at the Westwego Performing Arts Theatre, and judging by opening-night audience reaction, the 36-year-old spoof of 1950s B-rated horror movies hasn't lost any luster.

Richard O'Brien wrote "The Rocky Horror Show" book, music and lyrics for the original, 1973 stage production at the Royal Court Theatre Upstairs in London. The show had a U.S. preview at the Roxy Theatre in Los Angeles before a short Broadway run in 1975. Later the same year, "The Rocky Horror Picture Show" movie was released and became a cult hit.

The innocent couple wanders into a creepy castle where a transsexual convention happens to be taking place. Janet (Lucy Adair Faust), our Kewpie doll-faced, pony-tailed heroine, is initially reluctant to become drawn into the decadence. Her nerdy, bespectacled fiancé, Brad (Matias Grau III), is more game, if only for the chance to call for roadside assistance.

Like New Orleans college freshmen experiencing their first Mardi Gras, Brad and Janet are at first astonished and later liberated from their inhibitions.

Noting the silver-haired, conservatively dressed crowd at the Jefferson Performing Arts Society's early-bird show, I doubted I'd witness the essential audience participation that has traditionally accompanied both film and stage versions of "Rocky Horror." Since 1977, audiences have joined in by costuming, shouting favorite lines and doing the "Time Warp" again.

But I was wrong. Before Brad and Janet even stepped out into the stormy night, a rowdy, costumed group of 20-somethings, wearing black eye makeup and carrying props, jump-started the action. At the top of the second act, the theater's front row began denigrating the play's narrator (Jerry Lee Leighton). By the finale, the entire audience was on its feet, enthusiastically doing the pelvic thrust in a reprise of the "Time Warp" dance.

"The Rocky Horror Show" would not reach its comedic zenith without the strong performance of Hutton as the delightfully wicked Dr. Frank-N-Furter. He magnificently struts around the stage, outfitted in a black patent leather corset, pearls, fishnet stockings and crimson high heels, belting out "Sweet Transvestite." He displays a more dignified decadence than Tim Curry's lascivious screen personification, but delivers the carnal punch nonetheless.

The result is a lot of campy fun, no matter whether you're reliving youthful indiscretions or experiencing this nonsensical show for the first time.

-- Mary Rickard, The Times-Picayune
Posted by NorthWest Carrollton at 5:36 AM

Labels: Events, Residents in the News