There are 3 Railroad BELT systems in the New Orleans area:
Front Belt - Railroad System that skirts the Mississippi River and goes through Oak Street and parallels Press Street

Middle Belt - Railroad System that has been primarily, but not solely, used to get the Amtrak Trains into Union Station.  These tracks parallel Airline and go through Hollygrove. "But currently and for the last four decades have only been used by passenger trains - one daily (in both directions) and one about every other day - and a short, nocturnal local freight train (delivering news print to THE TIMES-PICAYUNE) one-to-three nights weekly". This route does not and will not have any grade crossings, meaning that there are no grade crossings & associated automobile traffic problems. NOUPT and ex-KCS-now-CN tracks are already exist in this area.

This article and the current preferred proposal for addressing the issues associated with increased train traffic on the critical East-West rail system that moves freight through New Orleans requires:
- eliminating the Old Metairie portion of the Back Belt
- building "the Carrollton Curve" (formerly considered an engineering implausibility)
- moving train traffic onto the section of the Middle Belt that has been used primarily to as a passenger train route
- the construction of new track a very narrow strip of land between Airline Highway and affecting the residences on the southern side of the track. 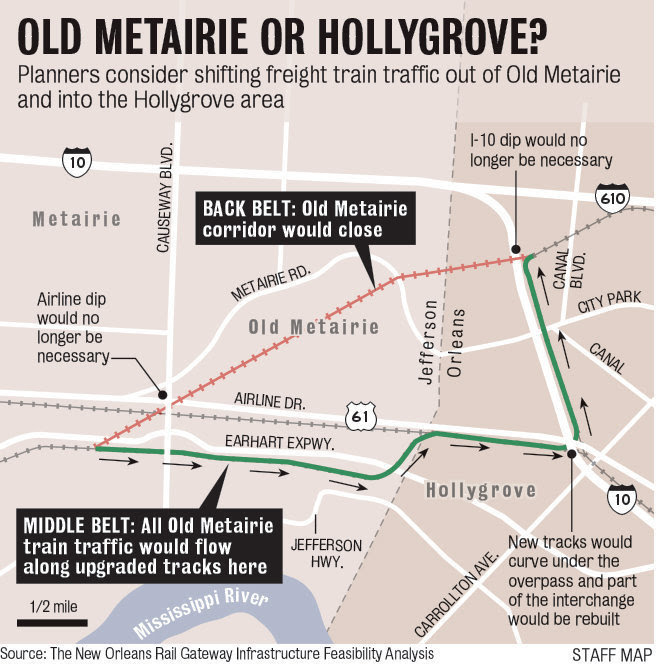 
Trains would be stored/parked would be along Earhart just into Jefferson Parish.

Posted by NorthWest Carrollton at 10:17 PM