Detail on the Ashton Theatre on Apple Street 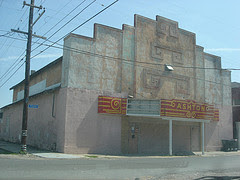 NorthWest Carrollton would like to work to have this building added to the National Historic Register.  In addition to being one of the last old theatres in New Orleans, it was designed by Ferdinand Lucien Rousseve (1904–1965).
In April 1934 he sat for and passed the state licensing examination for architects, becoming the first licensed Black architect in Louisiana.

We are in contact with some of Rousseve's relatives that remain in the New Orleans Area.

The Ashton is currently owned by the artist Lin Emory but is not open ot the public.


Ferdinand Rousseve was born on July 18,1904, in , into a devout Catholic household headed by his Creole father, Bartholomew, who was a postman, and his mother, Valentine Marie, who was a housewife. Ferdinand had three brothers and four sisters including twins, Leonie and Leona. His father faithfully recited the Rosary every morning and raised his children to have devotion for the Virgin Mary. Ferdinand’s sister, Theresa, married Jesus Christ by becoming a nun, and one brother, Maurice, ordained his soul to the Catholic Church by becoming a priest. One brother, Rene, was a social worker. Two brothers, Numa and Charles, who were gifted artists, became a professional landscape painter and university professor of fine arts, respectively. Ferdinand, like two of his brothers, chose a profession in the fine arts, but his oeuvre was forever ecclesiastically influenced.
Ferdinand’s father enrolled him in Saint Louis Elementary, a private school in New Orleans, and then successive New Orleans parochial schools—Holy Family Boys’ Middle School and Xavier Preparatory High School. Ferdinand Rousseve was inspired to study architecture by his Xavier drafting and industrial arts teacher, William Lewis. He graduated with academic honors third in his class in June 1922.


Rousseve was a smart and determined student who advanced his station in life by seeking out and conquering the educational opportunities that presented themselves to him. Following his graduation from high school, he enrolled at in in 1924 and received a diploma from the commercial course. Also in 1924, he attended Coyne Trade and in , earning a certificate in mechanical drawing and elementary machine design. The latter was a discipline in which patternmaker RICHARD MASON HANCOCK had excelled. Rousseve returned to and worked as a draftsman for Louis J.Charbonnett, a family friend, mechanical engineer, and mentor and owner of one of the leading millwright companies in the lower Mississippi Delta. After Charbonnett died in 1924, Rousseve left for , intending to enter the Massachusetts Institute of Technology. To prepare for the entrance examination, Rousseve enrolled at in . It was a worthwhile investment of a year of study. He won a Gold Medal in oratory and qualified for a four-year, full-tuition scholarship. The summer before he started college, he worked as a draftsman for Maginnis, Walsh & Kennedy Architects, who specialized in church architecture. Rousseve entered Massachusetts Institute of Technology in the fall of 1925. His matriculation was highlighted by many honors, such as receiving a $1,000 scholarship grant from the Cambridge Rotary Club. He was the only African American member of the Architectural Society and he was a dependable member of the Catholic Club. He spent the summer of 1926 working as a draftsman in the office of Edward T.P.Graham (1871–1964). The summer of


Greater , Neil Alexander Photography
1929 he worked as a draftsman for the nonprofit Architectural Bureau of the Young Men’s Christian Association in . His terminal thesis was “The Hall of Fame of a in Design.” In his fifth year, Rousseve graduated from MIT with a bachelor of science in architecture in 1930.


Not since ROBERT ROBINSON TAYLOR in 1892 had the Massachusetts Institute of Technology graduated a Black architect. Rousseve was a hot commodity and he quickly found employment as an instructor in the of at . He taught at the university from 1930 to 1933. During the two summers he taught at Howard he took classes in interior decoration, arts, and ornamental decoration in , probably offered by the popular Beaux-Arts Institute of Design.


In April 1934 he sat for and passed the state licensing examination for architects, becoming the first licensed Black architect in .1
Rousseve was an architect-academician with a strong preference for classical styles. His interest motivated him to attend the during the summers from 1936 to 1939 in a specialized field of the history of art, concentrating on twelfth-century French architecture. For his terminal thesis he wrote “The Majestas Domini in the Tympanum of the —A Study in Iconography.”2 It was an iconographic analysis of the “Majesty of the Lord” decoration theme found in the tympana of medieval church portals. Rousseve received his master of art degree during commencement ceremonies held in the summer of 1940.


Rousseve added a capital to his record of scholarship in 1948 when he was awarded a doctoral degree in architecture from . He made A’s in all his courses, completed his foreign (French) language requirement, and passed his oral comprehensive examination all within two semesters. His thesis, supplemented by a detailed scale model that he built, was a critical assessment of one of the last churches along the great Pilgrimage Road, “The Romanesque Abbey—Church of St. Martial at Limoges, France.”
Ferdinand married Elise Mirault Clarke of , in the fall of 1930. They were parents to Yvonne Elise, Angela Rose, and Marie Valentine. Rousseve, in the vein of ALBERT IRVIN CASSELL and HOWARD HAMILTON MACKEY SR., was a successful architect-administrator. In the fall of 1933, he was appointed assistant to the university president and business manager for SOUTHERN UNIVERSITY at . In 1940 Rousseve received a dual appointment as head of the Department of Fine Arts at in and university architect. He managed the department, taught design classes, and was responsible for supervising the Facilities Department as well as the construction of university buildings.

When Rousseve returned to in 1940, he opened a solo private practice to supplement the salary he received from . Rousseve maintained his architectural practice until 1948.


Rousseve designed many buildings in the Gulf region of , , , and . His commissions ranged from Catholic high schools to Catholic churches to houses. Among the most noteworthy were greater in and St. Jude’s in .

Rousseve was quoted as saying, “I have a strong conviction that it is our individual and collective duty to make our communities better places in which to live.”3 His civic commitment was demonstrated by board memberships in the New Orleans Family Services Society and New Orleans Council of Social Agencies and in by board memberships in the Cambridge Planning Board, Catholic Inter-racial Council of Boston, National Council of Christians and Jews, and more than a dozen other groups.


Ferdinand Rousseve died on July 18, 1965, at Saint Elizabeth’s Hospital in .4 He is interred at in Newton Centre, .


2. Ferdinand Rousseve, “The Majestas Domini in the Tympanum of the —A Study in Iconography,” (master’s thesis, , 1939).

*The Organs of the and Database is operated by George Nelson


This page is a service of www.neworleanschurches.com
and the Chapter of the Organ Historical Society