11 new locations
"Almost all new cameras are in school zones
The threshold for receiving a ticket during school hours in a school zone will remain 26 mph. 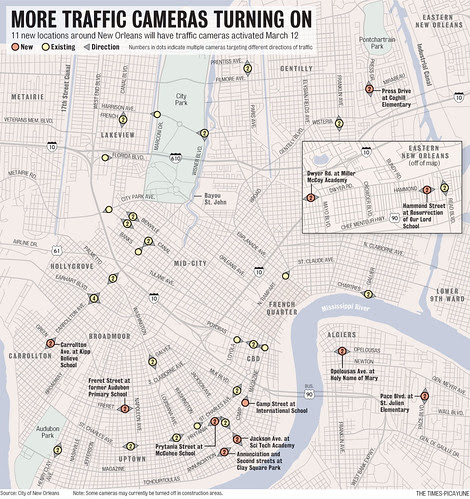 "City officials also plan to bump up by 10 mph the speed limit along Jackson Avenue between Magazine Street and St. Charles Avenue, where the city's second-busiest camera snared roughly 25,000 motorists last year. The camera accounted for about one-tenth of the camera-generated tickets issued by the city last year.

The new speed limit of 35 mph -- which was previously in place on the divided portion of Jackson before neighbors had it lowered -- will match that of most other divided streets in the city."
The is change above is appropriate. Consistency is important and this camera was nothing more than a speed trap.

BUT this is NOT...
"The administration plans to boost the threshold for receiving a ticket by 4 mph, except during school hours, meaning a driver has to be going at least 10 mph over the speed limit to trigger the camera."
The cameras on Carrollton at Earhart and I-10 have made a positive difference in speed and safety at these locations.  Changing the upper limit will allow folks to start speeding again. Leave it where it is. This makes up for the fact that over time people learn and change their behavoirs.
As the article says:
"Figures supplied by the city show that speeding violations have declined by more than 90 percent at most locations where cameras were installed in 2008."
"The new threshold for speeding violations will decrease the number of tickets the city issues, though officials could not provide exact data on how precipitous the drop will be. But data collected in traffic studies for the 11 new cameras suggest that roughly two-thirds of speeders are going between 6 mph and 10 mph over the posted limit."
If the city is going to generate revenue why NOT have it be for breaking the law?

The rules on Paying Tickets are going to change too.
"Almost two-thirds of the people who receive camera-generated tickets from the city pay their fines, the remaining one-third don't, creating resentment among the compliant payers."
"Officials are also promising to target more aggressively the roughly one-third of ticket recipients who don't pay, ..."
"The city will first send dunning letters, and then sue, to collect the debts of all non-payers who owe at least $500 in speeding fines, he said. That group, as of September, numbered at least 16,000."

So LOOK for those PHOTO ENFORCED Signs and SLOW DOWN!!!

"The free ride enjoyed by city employees who rack up fines in city cars is also over, Kopplin said. In the future, city employees' tickets may be waived only when the employee is responding to an emergency, Kopplin said. Those who don't pay fines will face discipline."

Posted by NorthWest Carrollton at 12:16 PM